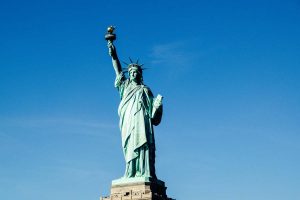 The preamble to the US Constitution reads as follows: “We the people of the United States, to form a more perfect Union, establish Justice, insure domestic Tranquility, provide for the common defence, promote the general welfare and secure the Blessings of Liberty to ourselves and our posterity do ordain and establish this Constitution for the United States of America.”

From the preamble, it is evident that there are six objectives that the US Constitution seeks to achieve. These objectives include the creation of a perfect union, establishment of justice, promotion of domestic tranquility, provision of a common defence, promotion of general welfare, and securing the blessings of liberty.

The sixth objective, which is to secure the blessings of liberty, is our main focus here. It is important to understand the intentions of the draftsmen of the US Constitution aim interpreting the sixth objective.

The question is, what does securing the blessings of liberty mean?

In answering the question of what does securing the blessing of liberty mean, it should be borne in mind that right from creation, all men were born equal and with that, we all possess rights which have to be protected by the body of law. It is these rights that are referred to as the blessings of liberty.

Thus, securing the blessings of liberty refers to the preservation of the rights and freedom of each citizen. The essence of this phrase in the preamble to the US constitution is to ensure that the rights of the people for liberty are duly preserved for themselves and the sake of posterity.

There exists legal and institutional framework for the protection of these rights. However, the ultimate responsibility lies in the hands of the citizen who has to be proactive in ensuring that his rights are protected and promoted.

When this phrase was drawn up, it was contemplated that these individual rights would be secured within the confines or context of the United States.

What Rights Are Known As The Blessings Of Liberty?

Freedom of speech is an important right contained in the US constitution. The freedom of speech enjoyed by the people is protected against governmental restrictions. It recognizes the right of a man to freely air his views publicly, and he can do this without attracting any form of sanction. However, there are some exceptions to the exercise of one’s freedom of speech. These exceptions are with regards to making defamatory statements, false statements about issues within the domain of the federal government, threats of terrorism, disclosure of confidential information, trade secrets etc.

The right to vote is another blessing of liberty. The government of the United States is prohibited from preventing any of its citizens from exercising their voting rights based on their color, race or previous condition of servitude.

Freedom of religion is a right provided to citizens of the United States. The US constitution is against its government exercising powers that restrict citizens from practising the religion of their choice. Citizens are allowed to have religious views; however, this right is not limitless. Thus, they cannot in the practice of their religion violate social norms.

The US Constitution, in its application, does not allow the government or other laws to interfere with the religious practice of its citizens; they can only regulate such practice. Under the US constitution, there is a separation between the state and religion.

The right to seek redress for grievances caused by the government is one of the blessings of liberty. Citizens are entitled to access courts and other dispute resolution mechanism to challenge the actions of the government. They can do this without the threat or fear of sanctions and punishment. This right is an avenue for US citizens to checkmate the activities of the government.

Flowing from this right, citizens can present their views and opinions on governmental actions without it being used against them.

In examining this further, there is a need to look at the concept of liberty to arrive at the blessings of liberty.

What Does Liberty Mean?

Liberty is a very broad concept. It refers to freedom from certain unfair restrictions that are imposed by a superior force which interferes with one’s actions, perspective and life. It presupposes a state of being free from restraint. However, it should be noted that there is no such thing as absolute liberty as the liberties enjoyed by a man is not limitless.

There are various schools of thoughts on liberty ranging from liberalism, libertarianism, republican liberty, socialism, etc.

The liberalist places liberty on a scale of tolerance. They believe that while you are free to do what you want, they are also entitled to the same measure of freedom.

The libertarian holds liberty as a core value in politics. Thus, they seek to resist all forms of oppression from the government and also that of other individuals oppressing one another.

The republican theorists are of the view that liberty does not necessarily envisage a situation where there is no interference in the affairs of men; they are more concerned nobody dominating over the other.

It is this republican liberty theory that influenced the US Constitution. However, in this instance, it is more of a compound republic which is also referred to as federalism.

In spite of these various views, there are different types of liberty. The liberties could be personal, political, economic, civil, national, natural etc. There are many others, but our focus is on these.

Personal Liberty refers to instances where persons can act as they want without any form of restrictions. In this type of liberty, there is a limit to which a person can compel another. In the same way, everybody can decide who they allow to interfere in their lives and can choose whether or not to permit access to others.

Political liberty is the type of liberty that allows persons to take part in politics without any form of restraint. They can hold political views, join political parties of their choice, and air their views on the activities of the government.

Economic liberty presupposes freedom in economic affairs, the freedom to choose what to do for a living, where to work, and seek better offers of income. They are entitled to pursue their economic goals and objectives.

Civil liberty refers to the freedom to be free from physical injuries and life-threatening. It cuts across most of the rights that come with the freedom of speech, assembly, the general application of one’s choice in a given endeavor. It focuses more on the exercise of our rights in ways that do not violate existing laws.

National liberty: This kind of liberty is quite the opposite of personal liberty. It is the kind of liberty that does not focus on a single individual; rather, its focus is on a nation. National liberty is the freedom of a nation to act and take decisions without any form of restraint. In light of this, it can be seen that this type of liberty is like sovereignty. Nations, especially in the international sphere, value their freedom and seek to maintain that freedom to act without any form of restraint or external interference.

Natural liberty is the total absence of any form of restrictions. It presupposes that the restraints by state and laws enslave a man whereas man was made free by nature and could do whatever he likes.

How Are These Blessings Of Liberty Secured?

The constitution did not specifically define the means of securing these blessings of liberty. However, it can safely be said that the judicial institutions that are vested with the enforcement of laws will come in handy.

The US constitution, by its provisions, seeks to secure these blessings of liberty as the provisions preserve the right to freedom of speech, freedom of religion, right to bear arms, right to vote.

In the United States, judicial powers are vested in the Supreme Court and other lower courts. Also, criminal matters are tried via jury.

One can be confused as to the meaning of the phrase ‘blessings of liberty’. It is what brings up the question, what does securing the blessings of liberty mean? It refers to the aims of the constitution to protect the rights of its citizens. Are Postal Workers Getting Paid During The Government Shutdown?
How Does Monetary Policy Affect Interest Rates?