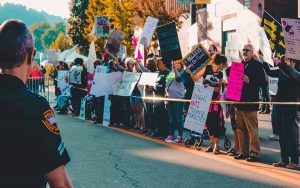 Freedom of speech is an important principle that reflects in the Constitution of the United States. It refers to the right of an individual or group of persons to express their thoughts and opinions: not just that, but the ability to do so without any form of restriction from the government. The principle of freedom of speech is extensive and applies to other types of expression.

The question is, why is freedom of speech important in a democracy?

To answer the question, why is freedom of speech important in a democracy, it necessary to understand that the principle of freedom speech is one of the primary tenets of a democratic society. A democratic society is one that envisages the active participation of citizens in the governance of the nation through their elected leaders. Thus, it becomes essential that people can freely express their views without any adverse consequences as a way of contributing their quota to the growth and development of society. Freedom of society is necessary to preserve the underlying principles of democracy that vest power in the people. Where there is no freedom of speech, that society is not a democratic one.

So that’s it about the importance of freedom of speech in a democracy. You can continue reading for more on this topic.

Freedom Of Speech In The United States

The United States actively protects the principle of freedom of expression in its laws. The body of laws prevents the government from placing restrictions on the rights of citizens to express themselves.

Freedom of speech is a recognized right under the First Amendment. It protects your speech from attracting any form of punishment. It also protects it from being censored. The protection offered under the First Amendment only applies to the protection from restrictions and censorship from the government. It does not protect your speech from being restricted by private individuals and corporate bodies.

Freedom of speech does not only give a person the right to express his views, but it also protects the person from any form of consequences after he has expressed his views. We cannot adequately discuss freedom of speech in the United States without taking a look at the First Amendment.

There exists a correlating relationship between these other rights and the freedom of speech. These are ways of expressing yourself, and any form of restriction on these rights limits your self-expression.

However, freedom of speech is a primary right among the other rights that makes up the rights of freedom of expression. The government cannot interfere or restriction one’s expression or speech without giving adequate justification for such actions.

Forms Of Speech Protected By The Principle Of Freedom Of Speech

We need to understand the scope of this freedom for a better understanding and application of the subject matter. Freedom of speech extends to both oral and written communication, as well as other forms of communication like the use of symbols.

There are various ways through which we express our thoughts and views. It does not necessarily have to be by way of spoken or written words. It could also be a form of symbolic communication. Symbolic communication is the use of symbols to express your thoughts, views, and affiliations. Certain symbols and rituals have a symbolic implication for certain sects of people. In such circumstances, the laws must protect their right to freedom of speech.

Apart from oral, written, and symbolic expressions, there are other forms of communication covered by the principle of freedom of speech. They are posts made online, commenting, and liking posts on social media, movies and television shows, drama, dance, clothing, donating money to fund one’s social or political interest, etc.

The Exceptions To Freedom Of Speech 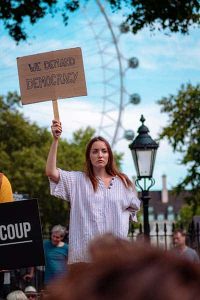 The principle of freedom of speech is not an absolute right. Thus, certain limitations limit this right. The essence of law is to address, balance, and harmonize all conflicting interests. It is essential to restrict the applicability of the freedom of speech in certain circumstances to protect the interest of other persons and the government. Otherwise, where such limitations do not exist, it is doubtful that the government can maintain a peaceful and stable society.

In essence, the First Amendment does not protect all forms of speech from restrictions and censorship. The fact that one has the right to freedom of speech does not mean that you can make certain statements and not face the consequences as a result. Some forms of expression that exist as exceptions to the principle of freedom of speech are:

Defamation can be in the form of libel or slander. Libel refers to written and published defamatory statements. Slander, on the other hand, refers to only spoken statements that destroy the reputation of another.

The fact that you are free to express yourself without any form of government censorship does not mean that you can make obscene statements or publications.

The protection under the First Amendment does not cover expressions that showcase sexual content and other forms of obscenity in an offensive manner. As a result, this exception prohibits words or images that would be offensive to viewers and young persons.

Your right to freedom of speech is an established right. However, this right does not protect you for making false statements under oath with the intent to deceive, mislead, and sway judgment in your favor.

Perjury, which means lying under oath, is a criminal offense in most climes, including the United States. Where the lies also affect the reputation of another person, an action in defamation is born.

Threats of terrorism against the established government are also acts that could attract legal sanctions, thereby acting as an exception or limitation to your right to freedom of speech or expression.

Despite your right to freedom of speech, the First Amendment does not protect statements that urge others to resort to the use of force as a means of achieving a particular political or social objective.

Thus, when in the course of a rally or any form of advocacy programs, persons are compelled, stirred up, or motivated to use violence to get what they want, such actions are likely to attract censorship and sanctions from the government.

Also, apart from inciting violence and the use of force, this exception to the right of freedom of speech covers inciting actions that cause harm to others. An example of this is when a person raises a false alarm that causes people to run in panic for their life. Such a person does not receive protection under freedom of speech for inciting the people to run and create a stampede resulting in loss of lives and injury to others.

Freedom Of Speech In A Democracy

Without the principles of freedom of speech in a democratic society, we cannot regard such society as a democratic one. You might call it a democratic state, but in the real sense of it, it is not a democracy.

When one abuses the right to freedom of speech, the cases of hate speech are bound to be on the increase, especially in this era of fast-paced online communications where it becomes much easier to circulate content that is threatening and prejudicial against certain classes of persons.

No doubt, the right to freedom of speech is an important one in our society today. Although, one might ask, why is freedom of speech important in a democracy? We should note that the principle of freedom of speech is necessary for the growth and development of society. It presupposes a system where there are no restrictions on citizens from expressing their views about their country and its state of affairs. In this manner, it is an avenue for them to contribute effectively to the advancement of society via their constructive inputs. Are Humans Prokaryotes?
Is Farming Profitable?