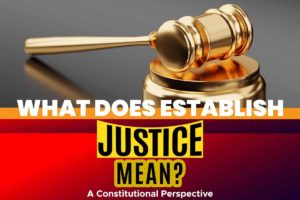 The preamble of the Constitution of the United States of America has five objectives. To Establish Justice is the first of the five objectives put forth in 1787.

These objectives were put forth in Philadelphia by the framers of the Constitution. Today, the democratically elected government of the USA is constitutionally tasked with establishing Justice.

This is undoubtedly a key principle of the Constitution of the USA, but;

What does establish Justice mean?

By “End,” he was referring to the ultimate goal and purpose of an existing government. It also happens to be a cornerstone of a functional society.

Why It Is Important To Establish Justice

There are several reasons why it is important to establish Justice. It is imperative that this happens for the following reasons:

When people are left to their own devices, the minorities tend to suffer. This is especially true in lesser diverse areas of society.

Establishing justice guarantees that the interests and freedoms of such minorities are not undermined in any way.

The Constitution of the USA protects the rights of minorities. This is under the 14th Amendment, under the equal protection clause. Any citizen of the United States, regardless of their race, ought to be treated equally.

2. Ensuring that the government is held accountable for its actions

Establishing justice guarantees that anyone who holds public office is subject to the Rule of Law. All public entities or offices constituted within the United States of America territories must adhere to these principles.

Established Justice is embodied in the concept of the rule of law. Nobody is above the law, and all people can be held accountable for violating the law. This principle is enshrined in the 14th Amendment of the Constitution.

Establishing Justice implies the existence of punitive measures for those who subvert Justice. This in itself can create an environment where people are compelled to respect the rights of others.

How The Constitution Of The United States Of America Establishes Justice

There are three main ways in which the Constitution establishes Justice. They are:

The Constitution sets clear provisions for removing a sitting president, any civil servant, and the vice president. This is because the Constitution protects the Rule of Law.

Any participation in criminal acts warrants the removal from the office of a public servant. This fundamental principle keeps the government in check. It also prevents abuse of office by public servants.

The will of the people is the supreme law. The Constitution allows the majority to a greater proportion in the House of Representatives.

This gives the majority greater legislative authority and implies that the laws reflect the people’s opinions.

On the other hand, the Senate comprises the same number of officials from each member state. This gives the minority states equal footing in debates and in terms of voting.

The judicial branch of government is tasked with dealing with issues to do with legality. They enforce laws that have been made in congress. The existence of the Judiciary provides a legal framework under which the federal government can conduct its activities.

It also reaffirms that neither the executive nor the legislature can act contrary to their constitutional mandates. This concept is known as Checks and Balances.

Functions Of The Judiciary

These are the duties of the arm of the government that is in charge of the justice system.

The Judiciary is responsible for presiding over all criminal and civil cases from the districts to the supreme courts. The authority of the courts is enshrined in the United States constitution, under Article iii.

Anyone convicted within the United States has the right to know why. The Judiciary has the legal responsibility to clarify to any individual the reason for their conviction.

The Writ of habeas corpus is enshrined in the Constitution.

This is applicable during trials. The Judiciary withholds the right to either determine that a defendant has acted in contravention to existing constitutional law. This ultimately prevents misinterpretations and wrongful convictions.

The Constitution of the United States is the highest authority within its territories. Any laws that are made in congress are subject to review by the Judiciary.

Every convicted individual has the right to contest the verdict of a lower court. The appellate court must hear such appeals and either uphold or issue a fresh verdict. This will ensure that everyone gets a fair and impartial trial.

The Supreme Court is the only legal authority that can deliberate over impeachment trials at the presidential level. They discern the legality of such hearings and issue verdicts in accordance with the Constitution.

Establishing Justice is one of the core mandates of the Constitution. It is one of the bedrock of any society. Through established Justice, legality and constitutionalism can survive and thrive. It is the foundation upon which any functional society is created. How Do Divorce Attorneys Solve Cases?

5 Crucial Mistakes To Avoid When Buying A Crypto Token

Transitioning To Civilian Life After Sustaining An Injury In The Military

How Do Commodities Perform Today And What Does The Future Hold?