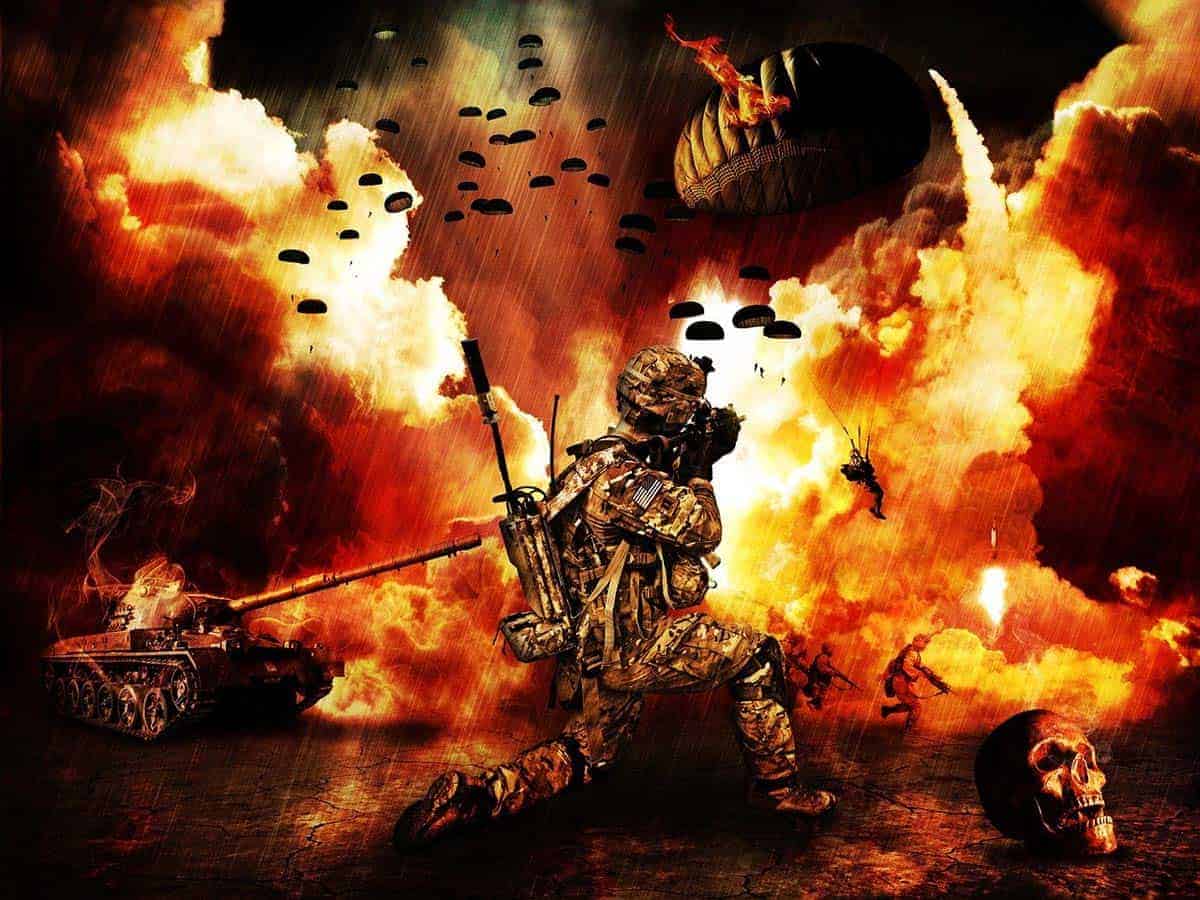 How close are we to World War 3, judging by events happening across the globe? Can it happen in the 21st century, or a different one? These are some of the questions people have been asking themselves for years now. And they have a valid reason because tensions have been rising in the Middle East, the Asian continent and the rest of the world. However, we cannot forget the devastating effects of the previous wars; World War I and II. Those who fought in past wars or witnessed it will resist any attempt to start another war. Alright, so here goes the all-important question;

Well, all possible signs that could lead to an all-out war have been triggered. There’s rising tension in the Middle East, North Korea forging ahead and testing their nuclear warheads despite sanctions, the killing of Qasem Soleimani, and the rise of other superpowers. The emerging superpowers include Russia and China, with the latter recently ending its feud with the U.S, in what experts term as “trade wars.” However, with all these happening, the most likely event to instigate a war was the killing of the Iran army commander, Qasem Soleimani. But it seems no country wants to risk going to war because of the devastating effect it could leave. Plus, there are other ways a nation can display its might. An example is the trade war between China and the U.S.

Read to find out more about the topic!

The Beginning Of World War III: What Factor Could Trigger Such Conflict For The Third Time?

War, war, and war! The thought of it happening scares the living daylight out of me. And I know it does the same thing to you, too. It’s an experience that no individual or country wishes to undergo. That’s because whether you are a superpower, have a well-armed military, or have enough fighters; your opponent will still cause you some damages.

However, a look at what took place at the start of the year 2020 would remind you of the ugly memories that all countries, including the U.S, have about wars. The hoisting of the red war flag by Iran, which was a sign of war, didn’t yield any result.

The red flag Iran hoisted was to indicate the possibility of several fights to come. The issue was between the U.S and Iran, following the death of Soleimani. The flag also has a slogan that reads “O’ Avengers of Hussein.”

Did Iran retaliate following Qasem Soleimani’s death? The answer is yes! They responded by bombing several U.S military bases around their territory. Soleimani’s death was also greeted with missed feelings, with some world leaders arguing that the decision by Donald Trump was unpalatable and could lead to an escalation in the Middle East region and beyond.

But outside Soleimani’s death, other factors could give rise to World War III. It’s just that the one that caught our attention the most and made us believed the war between Iran and the U.S, together with their allies, would be a now or never thing, was Soleimani’s demise.

Let’s look at numerous factors that could contribute to a third World War.

Russia, a world power with great military might, has always somehow been involved in the previous wars, talking about World War I and II. Again, Russia has proven itself as the key driver of the Ukraine conflict.

Now, Ukraine and Russia are at it again! The conflict is regarding the Crimean Peninsula, which Russia was said to have annexed back in the year 2014. And as of the time of writing, the fight between the two regions has started.

Russia has also been actively supporting separatists in Eastern Ukraine with everything they need to win the conflict between them and the Ukrainian government. They provide materials, men, and even money. However, Ukraine’s president, Volodymyr Zelensky, has extended the hand of peace to president Puttin of Russia. But many in both countries have expressed missed feelings about the agreement.

For the Ukrainians, a seize fire and withdrawal of the Ukraine military will weaken the country’s defenses, particularly at the Eastern border. It’s also surprising that the ceasefire agreement had been in place since 2014, but both parties haven’t enforced it. So, Zelensky’s critics believe things could take a turn for the worst, should Ukraine withdraw its military from the region. But one thing is for sure; there’s little to no hope of Ukraine reclaiming Crimea.

So, there’s a risk of further conflict between Russia and Ukraine if the situation between them doesn’t improve. Plus, it will also reach a boiling point where allies of both countries will get involved in the conflict.

The U.S government is fully aware of what being in possession of a nuclear warhead means. That’s why it has been on the neck of North Korean’s leader and the entire country, slapping several economic sanctions on the nuclear power-obsessed nation.

Another country that is stepping on the nerves of the U.S government regarding nuclear activities is Iran. It has received a series of economic sanctions for the continuity of its nuclear program. But the U.S government’s manner of handling the situation has been called into question.

The U.S president’s decision to withdraw the country from JCPOA (Joint Comprehensive Plan of Action), angered those at the helm of affairs in Tehran and made the possibility of honoring the nuclear deal in severe doubt. This, together with the killing of Qasem Soleimani, has further angered Tehran and dented the region’s already fragile relationship with the United States of America.

So, the growing investment and freedom given to countries to develop these weapons of mass destruction pose a massive threat to world peace. There might be conflicts between countries one day that will involve the use of nuclear weapons, which will cause a significant loss to lives, properties, and economic backwardness.

It’s absurd but real! Resources can trigger World War III. Take a look at renewable natural resources, for instance. Their reserves keep on reducing now and then. A few decades from now and most countries might have nothing.

However, when this happens, the stronger countries will start oppressing the weaker ones. Their primary purpose will be to get their resources and walk away. Any resistance from the leader might lead to unfavorable events. The thing is you might not find the stronger or more powerful countries oppressing the weak directly. Instead, they will empower militants and terrorists to unleash civil unrest in the region.

An example is the Russia-backed armed group in the Eastern region of Ukraine. We also have the Somalia civil war that has lasted for years. The country had an abundance of gold and gas, and the future was bright. But today, they have been pushed into a civil war.

4. Expansion of a territory

Can territorial expansion give room for a war in this 21st century? The simple answer is yes! Territorial expansions have been a system by which most countries increase resources or become more powerful in the past. And it has started happening across the globe. This activity also threatens world peace. We have witnessed numerous countries, particularly neighboring ones, at loggerheads because of that.

What caused World War I? It’s partly because of territorial expansion. Austria was interested in Serbia and was consumed by the thought of annexation. That led to an all-out war between both nations, including their allies.

Today, Russia is repeating the same thing before our very eyes. In 2014, it seized Crimea from Ukraine, displacing over 2 million people and destroying properties worth a fortune. Putin’s reason for backing the move was that the region has more ethnic Russians.

Israel, on the other hand, is clamoring to reclaim remaining Palestine. The list goes on and on! So, the greed to expand territories is driving many warmongers nuts and posing a severe threat to world peace. And if caution isn’t taken, the weaker countries will fight back and have their allies back them.

Tension keeps rising! World leaders are clamoring for peace and de-escalation. If you pay close attention, you will also notice that most of these countries have started to form alliances. However, we have seen things that could trigger World War 3 happening. The question is, what are those countries that could be responsible? Here they are;

Is World War 3 close? That’s the question left for history and the future to answer. However, we have seen the signs. What remains is for them to manifest. By and large, peace is more important than war. So, leaders across the world must give peace a chance. Governments and international bodies should also place stricter sanctions on countries producing nuclear weapons.

Is Save The Children A Good Charity?

Is Suffocation Painful?
Why Are The Patriots So Good?