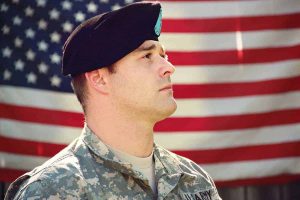 Do you want to know if you can join the army with depression history or retain your position in the military with such a condition? If yes, then you are in the right place. I understand issues regarding depression are tough. But the U.S. Army might not be the best place for people with such challenges, because of the nature of the job. So, let’s tackle the question;

Here’s what you need to know. You must be stable mentally, physically, and otherwise to qualify to join the U.S. army. And having a history of depression can reduce your chances of joining the force. However, there are ways the rules can be in your favor. For instance, if you have a depressive disorder, the only way you can be disqualified is when you had outpatient care for 12 months or inpatient care. You also must be stable and be without treatment from 0 to 36 months to qualify to join the U.S. Army with such a condition.

So, that’s it about enlisting in the U.S. Army with issues of depression. You must be sound in every aspect, be it mentally, physically, and otherwise. Read further for more information.

Are There Individuals In The Army With Depression History?

The answer to this question will be no! That’s what many people would say. And why should they? The U.S. Army is well-organized and also viewed as one of the best in the entire world. Their level of professionalism second to none! They set the standard for others to follow.

However, I would like to state that statistics show that most enlistees have bent the rules in their favor. What I mean is that there are people who are in the U.S. Army with a depression history.

Most of them entered with the condition, while some developed it while in service. Now the big question; is it right to disobey the rules that stipulate that people with a specific mental health condition aren’t qualified?

The answer is, no! Rules are meant to be obeyed. Those who are circumventing the rules need to understand that there’s punishment for such offenses.

Having mental health challenges like depression and enlisting in the army can dent your reputation. It can also make it difficult to gain promotion to another level, which is something everyone in the military craves.

The army prohibits individuals with mental health conditions or disorders from joining the force. However, research data indicates many persons have been skirting these rules in the past.

A study conducted and shared in JAMA Psychiatry, in 2014, shows that 25 percent of non-deployed military members have got some form of mental health issues. The disorder in question ranged from ADHD (attention deficit hyperactivity disorder), panic disorder, and even depression.

Now what’s most worrying is that two-third of the said figure had the mental health issue before their enlisting. The question is, how do these individuals go unnoticed, given the strict recruitment process the U.S. military has in place?

I understand their passion for wanting to join the army. And I also think the military should have a program in place to help those with these conditions, instead of disqualifying them. It would help them become better for the good of their relatives and society.

Medical Standards Of The Military: Things You Should Know

I would like you to know that the military takes issues regarding mental health seriously. So, you need to be mentally sound not only to gain entry into the army but to remain in service.

Besides depression, I would also like you to know that other conditions can disqualify a person from gaining entry into the military. Illness is one of them. Some sicknesses can make one unfit to join the U.S. army or continue in service.

The use of certain drugs can also disqualify some persons. Plus, even if one was misdiagnosed, it still can prevent the individual from joining the army. That’s the way things are.

Below, I will list the various medical conditions that can disqualify an individual from joining the military.

These conditions can disqualify a person. The only way it won’t is when the applicant shows passing academic performances. He or she must not have used drugs for treatment for at least 12 months to the time of the application.

Having a current/ history of disorders that comes with psychotic features

These psychotic features include paranoid disorder, schizophrenia, and other psychosis. Know that these conditions are disqualifying.

So, that’s it about conditions that can disqualify a person from joining the U.S. army.

Alright, below are some other conditions that are disqualifying. Let’s check them out!

Can Mood Disorders Disqualify You From Joining The Army? 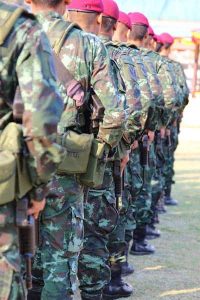 Yes! I have said before that the military isn’t open for individuals with a mood disorder. These include cases like bipolar disorders, depression, psychoses, including other forms of depressive issues. These are disqualifying health issues. So there’s no point wasting your time and energy applying with any of the above conditions.

Again, individuals with mood disorders that need drugs or outpatient care for more than six months are also not allowed to join. Having symptoms of mental health or mood issues that affects your motor skills can also lead to disqualification. These include learning, social ability, and work efficiency.

What I mean is if your mental health issues affect any of the above, then you are up for disqualification. Another thing you need to understand is that these issues are severe. Other cases might be considered for a waiver to enter the army, not matters relating to mental health.

So, have in mind that mood disorder can disqualify you. The military doesn’t toy with such cases because many things can go wrong as a result. The lives of other officers could also be at stake.

Can Behavioral Disorders Disqualify You From Joining The Army?

What about behavioral disorders. Are they enough to disqualify a person from joining the military? Well, here’s something you need to know. History of behavioral disorder in school, and also with any law enforcement agency where dangerous behavior was exhibited to one’s self or others is prohibited.

Such conditions can lead to disqualification. What about antisocial behaviors? Well, that’s another issue that can disqualify a person from the military. There’s a belief that individuals with these types of behaviors won’t adapt to the military service. Of course, they are antisocial and won’t get along with other personnel in the military smoothly.

Another behavioral disorder that can disqualify an individual is a personality disorder. This involves the inability to stay calm in school premises, team up with employees or employees, including social groups, can disqualify you.

You can’t also be found sleepwalking, particularly after your 13th birthday. It’s terrible behavior in the eyes of the military and could lead to disqualification. Again, eating disorder, which includes bulimia, anorexia, and others that have started for more than three months or after one’s 14th birthday, can also bring about disqualification. Such individuals are considered unfit to be in the army.

Can Phobias, Anxiety, And Self-Harm Disqualify You From Joining The Army?

Let’s take a look at suicidal behavior. Does it make you unfit to join the military? Well, the simple answer is yes!

An individual who has exhibited suicidal behavior is automatically unfit for the military. Self-mutilation is another thing that disqualifies an individual. People with such history are considered unsuitable to join the army.

I will also like to add that the military is stressed. So, you have to be ready to handle stress and be efficient. Showing acute reaction to anxiety or post-traumatic stress can disqualify a person. These Stress Management Strategies from BetterHelp will allow you to be free from stress.

Can Drug And Alcohol Abuse Disqualify You From Joining The Army?

Such a lifestyle automatically disqualifies an individual from joining the army. Another condition that can make you unqualified to join the army is drug abuse. So, be mindful of these lifestyles and health conditions that can spoil your chances of joining the military.

I presume you now understand the answer to the question, “Can you join the army with depression history?” It’s a straightforward answer that doesn’t need much explanation. For the records, the answer is no! You see, when you consider all the medication conditions that disqualify people from joining the military, you will find that mental health is the most rigid. In other words, no one can bend the rules. Individuals with issues relating to mental health are disqualified without hesitation.

Everything You Need To Know About A Military Medical Malpractice Suit Is Social Engineering Illegal?
How Old Is Capitalism?