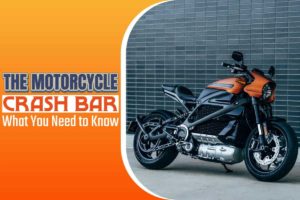 You could say that motorcycles are inherently dangerous, and you would not be wrong. That is because there is no steel frame around a motorcycle in the same way there is around a car or truck. This is why some individuals elect not to own motorcycles or operate them.

Some people also own motorcycles and stop riding them when they marry, cohabitate, or start a family. They know that now people rely on them, so they either sell their motorcycle or only ride it very infrequently. Others might give their motorcycle away to a family member or friend.

If you do continue to own and ride a motorcycle, you should know about the crash bar. Crash bars on motorcycles can make them a little less dangerous.

What Exactly Is A Motorcycle Crash Bar?

What is a motorcycle crash bar? If you don’t know very much about this transportation form, you might never even have heard of one prior to today.

A typical motorcycle crash bar is a steel tube that the manufacturer mounts to the motorcycle’s lower frame. There might be chrome plating over the steel.

How Do They Work?

The motorcycle crash bar protects riders in a crash, at least up to a point. In some wrecks, that crash bar might even save a rider from a catastrophic injury.

The key in determining whether a crash bar will save your life is how fast you’re going. If you’re flying along the highway at sixty miles per hour, the crash bar will not do all that much for you. If you’re on a local road, though, and you’re doing thirty when another vehicle hits you, that’s when you’ll be glad the crash bar is there to protect you.

You might get in a traffic situation where you need to hit the brakes and tip the motorcycle over on its side. This isn’t fun, but it’s better than running into an inanimate object or one that’s a lot bigger than you.

It’s not pleasant to think about this scenario, but the reality is that the motorcycle crash bar can keep you from sustaining severe injuries in some cases. You won’t escape unscathed, but some road rash is better than a broken leg.

The crash bar can even help you if you’re sitting on the motorcycle in a parking lot and you overbalance and tip over. That crash bar prevents serious damage in several different scenarios.

The motorcycle crash bar helps prevent severe lower extremity damage more than anything else. Lower extremity damage can really mess your life up, as you may not be able to walk, run, or do other daily activities if you hurt your ankle, knee, or other lower parts of your lower leg.

However, as helpful as it can be to have that crash bar in place, there are several kinds of wrecks where it will not help you. For instance, you may get in a lane change accident, or perhaps you might get in a rear-end or head-on collision. In any of those scenarios, the bar will do little to aid you.

Do These Crash Bars Help As Much As Some People Claim?

There are some individuals who feel like motorcycle crash bars don’t help the rider as much as the manufacturer claims. The reason for this is that you have to be in a very particular position during a crash for the bar to cushion your leg. Some studies seem to indicate that most riders don’t stay in that one position when the average crash occurs.

The truth is that motorcycle accidents can be very sudden. You might contort your body if you realize that a vehicle is about to hit you or you are about to run into them. If that happens, you might move your body out of the ideal position for it to be in for the crash bar to protect you.

What Might You Do To Stay As Safe As Possible?

If you want to be as safe as possible, the simple answer is not to ride a motorcycle. Whenever you do, that puts you at risk that you would not otherwise experience.

If you need to get around, you can take public transportation, or you can always drive a car or truck. Those sorts of vehicles are inherently so much safer because you’re not exposed to the open road and other vehicles in the same way you are on a motorcycle.

As for the average crash bar, most studies seem to show that they can’t hurt you. Although they might not help you in every motorcycle crash situation that happens, having them on the vehicle appears to be better than not having them.

If you ride a motorcycle often, you will probably be glad that you have one attached. You might also decide to do what we discussed earlier in the article, namely, no longer riding because you feel like the potential risk is not worth the benefit.

People usually like riding motorcycles because of the way the vehicle makes them feel. However, nothing says you cannot get that feeling in other ways. You can be a thrill seeker without riding a motorcycle, and that might be the best thing for your family and those who care about you.

It’s all about what you prioritize. The time in your life when you might feel like riding a motorcycle is worth it is when you’re young and unattached. When you get to later life stages, you may decide to slow down on the perilous activities.

In the meantime, when your ride, the crash bar is one way the manufacturer can make your motorcycle a little bit safer.