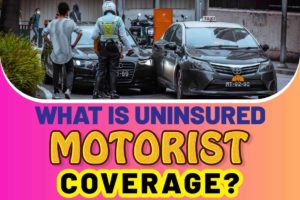 What if you’re involved in an accident, and it wasn’t your fault? What if the other driver doesn’t have motorist insurance? The first thing you should do is contact a car accident personal injury lawyer to see your best course of action.

How Does Uninsured Motorist Coverage Work?

In these instances, uninsured and underinsured motorist coverage protects your finances.

What Is Underinsured Motorist Coverage?

There are four main types of uninsured and underinsured motorist coverages.

Uninsured motorist bodily injury coverage or UMBI pays for a person’s medical bills, lost wages, and physical suffering after an accident. It can also pay for funeral expenses in the tragic event someone dies due to an at-fault driver’s negligence. If you’re involved in a pedestrian or bike accident, UMBI may also apply.

Uninsured motorist property damage (UMPD) covers damages to the car or property caused by the uninsured at-fault driver. In some states, UMPD also pays out if an underinsured driver causes an accident. UMPD also covers expenses for hit-and-run in most states, while other states only allow UMPD to pay in identified driver circumstances.

UMPD has limits for how much UMPD will payout for crashes which is usually the same as your property damage liability insurance. States may require a deductible for UMPD coverage, which is typically between $200-$500.

Underinsured motorist bodily injury (UIM or UIMBI) kicks in when medical payments (Med Pay) or personal injury protection (PIP) fail to cover the extent of the injured party’s medical expenses. However, UIMBI may offer higher limits than both Med Pay or PIP, which is something to keep in mind.

Underinsured property damage coverage works very much the same as underinsured bodily injury coverage. If the underinsured driver was at fault in an accident, but their coverage isn’t enough to cover the damage, UIMBI can cover the difference.

How Much Uninsured Motorist Coverage Do I Need?

Most states require uninsured motorist insurance. In these states, you will need to buy the state minimum when you get car insurance quotes. The minimum typically includes UM coverage in amounts that match your liability coverage amounts. For example, if you have liability limits of $50,000 for injury to one person and $250,000 for injuries per accident, you would commit to a 50/250 UM plan.

If your state doesn’t require UM coverage, you might wonder whether it’s necessary. If you have other coverage to cover accident injuries, such as medical insurance, you might not need uninsured motorist coverage. If you have a high deductible health plan and need to pay large sums of money for hospitalization, UM might be an attractive alternative plan.

You should also consider whether you have other insurance that could cover property damage when deciding on UM. Collision insurance covers your car if someone else hits it, eliminating time and worry spent trying to track down the other driver or go through a painful, drawn-out litigation process. Approximately one in eight drivers nationwide are uninsured, but numbers vary from state to state. You should check with your state and base some of your decision on the uninsured driver prevalence within your state.

Conclusion- What Is Uninsured Motorist Coverage?

Accidents happen, and it’s always good to prepare for the worst. Even if you aren’t in a state that requires it, having uninsured motorist coverage is an intelligent contingency plan. It saves you the worry and hassle of dealing with potential issues after the fact. When Do I Need Technical Cleaning Services?
4 Tips How To Communicate Anti-crisis Strategy In Your Company