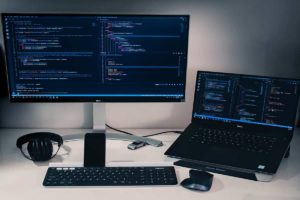 The rise of agile frameworks as a working practice has been notable. Enabling more streamlined development and production in various areas of commerce and industry, agile is often found replacing traditional methods of operation.

The problem with adopting agile where more familiar waterfall practices are dominant lies in adversity to change. The ‘we’ve always done things this way’ frame of mind often prevails. Furthermore, as we shall see when we talk about how ING uses LeSS framework – the Dutch banking and finance giant is a prime case study – adopting agile can lead to some workforce feeling they have been dropped down a peg in terms of stature.

This is because agile focuses on teamwork and cross-border interaction rather than putting one person at the top and the other beneath. This article will look at two agile frameworks that each have their own merits – SAFe and LeSS – and how they differ. Let’s begin with a simple explanation of the way agile works.

The traditional method of corporate working is to attend the office from 9 to 5, sit at a desk and perform a predetermined task. Your answer to your boss, who answers to theirs, all the way to the very top of the hierarchy. Increasingly, this format is being seen as outdated.

There is not a specific definition of what an agile working format is. Each company opting to employ this method will lay down its own rules. However, every agile format aims for one major factor: empowering the employees to decide how they work, often when they work, and sometimes where they work.

It could be said that 2020, throughout which the covid-19 pandemic wreaked havoc on traditional working practices, opened many eyes in the commercial world regarding the benefits of agile. Concerns about loss of productivity were, in great numbers of cases, proven wrong as workers warmed to working remotely, doing so when was best for them, and with greater productivity thanks to better use of time.

Agile allows for a task to have its purpose set but for boundaries and barriers to creativity to be removed. The result is better performance all-around, increased productivity, reduced costs, a happier, more satisfied workforce, and impressed and serviced clients.

Agile is an evolving working format, so let’s look at the two distinct versions we mentioned above.

SAFe is an acronym for ‘Scaled-Agile Framework.’ It is described as a lean-agile framework. Like all versions of agile working, SAFe aims to get more out of the workforce by giving each individual the power to make decisions and move beyond the boundaries imposed by traditional working methods.

SAFe works by way of education and training. This is essential as adopting SAFe – or any form of the agile framework – requires complete commitment to a corporate structure overhaul. It is often found that more senior management employees are opposed to this change. This is because it initially appears they have been downgraded. However, once the framework is established and in operation, all involved begin to see the benefits.

Many businesses are working to the SAFe agile format – it claims to be the world’s leading agile framework – with great success. This is a sign that commerce, on the whole, is becoming more forward-thinking. After all, allowing individuals to effectively spread their wings and innovate is part of the SAFe format.

If there is one area of employee improvement that SAFe encourages, it is to have the courage to try something new. Mistakes will be made, but we learn from mistakes. There is talent waiting to be uncovered throughout the ranks of every workforce, and by using agile, that talent can come to the fore.

Let’s now have a look at LeSS.

LeSS is an acronym for ‘large scale scrum.’ A scrum is a term sometimes used to describe a working team unit within the agile framework. Agile with Scrum consists of a series of ‘sprints. These are carried out by individuals or teams working simultaneously on various areas of the product or project in progress.

However, where LeSS differs is that it engages all developers and individuals working on one product at one time. This is to improve development, problem-solving, and production time. It is perhaps the ultimate teamwork platform and can involve anywhere from a few teams to thousands of people working on one project to enable efficient completion. One Product Owner can work with as many as eight teams in the LeSS framework.

Of course, using the LeSS agile framework requires the same sacrifices and corporate hierarchy reshaping that SAFe involves. We mentioned ING as a case study above, and it’s worth reading the report we linked to. ING began by discussing the idea with its employees, who came to realize that with only one Product Owner for many teams, several product owners would need to relinquish their roles to scale up to LeSS.

At ING, a number of Product Owners realized that the new routine would be wasting their talents remaining at that post, so they proposed themselves to step down from the roles in place. In addition, as ING was already using a standard agile framework, it was easier for individuals to recognize the overall benefit of moving to LeSS for greater productivity and efficiency.

There are clear indications that an agile framework is a way forward for greater productivity and getting the best out of the individuals employed. Rather than keeping each employee to a strict daily routine, allowing them to flourish by removing the set boundaries in a traditional working environment gives each person a chance to show their strengths.

With many major corporations and smaller growing businesses recognizing the advantage of using frameworks such as SAFe and LeSS, it is clear that there are workable platforms for all sizes and types of a commercial entity and that education and training are the keys to successfully adopting agile.