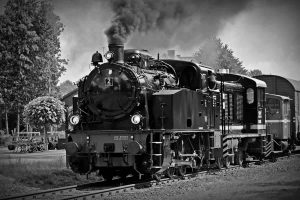 A steam engine is a machine that uses steam or heat to engage in mechanical work. The use of the steam engine is traceable to the 16th and 17th centuries. However, it gained more prominence and became more relevant in the industrial revolution.

The question is, how is the steam used today?

The History Of The Steam Engine

The first set of steam engines that existed were the aeolipile, and they were mostly used by persons that were trying to understand how steam works. History has it that the first person that invented a steam engine was Hero of Alexandria.

Hero of Alexandria was a Greek scientist that opened the eyes of the world to the power of steam. He created the aeolipile, which was more of a hollow sphere that had two tubes connected to it. The sphere connects to a boiler from which steam passed through, caused the sphere to rotate, and produce mechanical energy.

The invention by him and other scientists did not receive much attention until in the 16th century when others discovered the actual usefulness of the generated steam power, and how it makes activities like pumping water easier. The steam engine was no longer a play object that lacked practical relevance but became something that could do actual work.

Thus, Thomas Savery is the first person to create a pump using steam energy. It explains why history recognizes him with steam engines. His invention of a steam engine was the first of its kind to be available in commercial quantity. History states that the creations of other subsequent pumping mechanisms were improvements on the invention of Thomas Savery.

In the period around 1712, Thomas Newcomen invented the atmospheric engine. It was an improvement upon the works of Thomas Savery. It employed the use of piston to condense water steam. The engine was particularly useful for pumping water at depths that one could not easily reach. He called his invention atmospheric engine because of the involvement of air pressure in the process. It was the air pressure that powered the piston and moved it into the vacuum of the condensing steam.

However, history cannot ignore the contributions of James Watt, who in the course of fixing the engine invented by Thomas Newcomen, discovered the problem with Newcomen’s invention. He realized that the inefficiency of the Newcomen’s invention was traceable to the condenser. In solving this problem, he figured out that if he introduces a steam engine that has a condenser that is separate from the cylinder, the problem will no longer exist. Thus, he created a steam engine with a separate condenser and continued to introduce more improvements to the steam engines. His contribution was around the period of 1763 to 1790.

Others like Richard Trevithick, George Stephenson, and Oliver Evans also contributed to the development of what is known as the steam engine today. They introduced steam engines that could work with and withstand high pressure.

How Does The Steam Engine Work?

A steam engine uses heat to power its operations. The boiler produces the heat or steam. It is the steam or heat that converts to mechanical energy that is useful in work.

The components of a steam engine are piston, cylinder, boiler, steam reservoir, drive wheel, and a slide valve. In the boiler, there is burning coal that boils the water and generates the heat or steam. As the pressure of the steam increases, it expands and leaves the boiler through the tubes or steam pipes connected to it. The escaped steam flows into the steam reservoir. It is the side valve that regulates the steam and moves it from the steam reservoir into the cylinder where it serves as a force to push the piston until the drive wheel begins to rotate and make the machine to work.

The Problems With A Steam Engine

The steam engine was one of the factors that led to the industrial revolution. From the onset, the steam engines created were usually so large that they were only available for industrial processes. However, as time went on and with the subsequent improvement on these steam engines, they began to be much smaller in size.

There are reasons the steam engine is not in widespread use in present-day industrial activities. It is because the steam engine had many challenges that made its relevance limited in the face of the recent advancements in technology.

One of the problems associated with the use of steam engines is that although it worked great in theory. However, it lacked practical efficiency in most industrial processes that made its maintenance difficult and unsustainable.

The steam engines used up so much energy to produce the required pressure for its operations. Out of the enormous heat generated in the process, only a few were useful and got up to power the wheels and make them rotate.

We cannot compare it to the diesel engines that replaced it. Unlike the steam engine, the diesel engine used a lesser amount of fuel. It did not require lots of replenishing of coal and water at regular intervals to power the entire process.

The cost of maintaining a steam engine was another factor that led to its diminished relevance. It had to be continuously powered with coal and water to keep it running, and during the period of refuelling it, it was not available for usage. Asides that, the operation of the steam engine was quite messy, and it needed regular cleaning.

Only industrial operations could make use of the steam engine. It is because of its massive size that one cannot use it in smaller operations like cars and even domestic use. The boiler and furnace for heating water are usually big. It requires that the facility has enough provision to accommodate the heavy external combustion engine.

Unlike what is obtainable in recent times, the operation of a steam engine is as a result of its external combustion system. There was always the risk of the boiler exploding. In circumstances where the steam pressure gets so high, it could explode and lead to loss of lives and properties.

The Relationship Between The Steam Engine And Geothermal Power

Geothermal energy is the energy that one generates from the use of steam power stations. It uses the heat that comes from beneath the earth to the surface. It is this heat that powers the various geothermal processes.

Just like the steam engine that is powered by steam, steam also powers the geothermal power plant. Steam is a renewable source of energy.

The Relevance Of The Steam Engine In Our World Today

The steam engine conceived in the era of the Industrial Revolution is not in much use as it was then. Nowadays, other sources of power generation, such as electricity and the use of fossil fuels have taken over. The internal combustion systems have overshadowed the use and development of the steam engine. However, it does not mean that the steam engine is no longer useful in the world today. It is still useful for nuclear power plants to generate electricity.

The fact that the world is gradually running out of fossil fuels to power its engines brings us the stark reality of the power that renewable energy sources have. Resorting to geothermal energy as a form of an energy source that does not deplete means that the world is about to revisit steam engines in ways that will help to sustain their relevance in modern times.

Resorting to steam engine looks more attractive because the concern for emissions into the environment is much lesser. In this age and time when the climate change discussions are at the forefront of social discourse, there seems to be hope for the steam engines. Steam engines would even be useful in cars and other machines.

It might seem farfetched but then, the performance of oil in the world’s market, climate change and the effect of the emission of greenhouse gases into the environment, will sooner than later cause a reawakening in the steam engine industry.

The steam engine was an important invention during the industrial revolution. However, we cannot say that this is the case in recent times. It brings us to the question, how is the steam engine used today? The steam engine is still useful in some industries to generate electricity, although it has lost much of its relevance. It is instrumental in powering nuclear power plants. Also, the operations of the steam engine seem to be visible in the use of geothermal energy which happens to be one of the options for renewable energy in present-day society.

The Motorcycle Crash Bar: What You Need To Know Is Your Social Security Number On Your Passport?
Where Does Tariff Money Go?