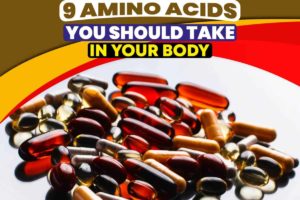 Proteins are an important nutrient for our body. They help build up the cells in your body, especially the muscles and bones. Within these proteins are what we call amino acids and are what does the job in building our cell tissues. We can get amino acids by eating certain food groups, medicinal solutions, and on organic bcaa supplements.

Out of the over 500 amino acids found in our environment, there are about 20 that the human body needs. And out of those 20 acids, nine of them are not produced in our bodies, hence the need to gain them. These nine amino acids are called essential amino acids.

The following is a list of the nine essential amino acids, the specific roles they do to the body, and where you can find them.

Histidine is one of the nine essential amino acids. It is also called L-histidine and sometimes called a semi-essential amino acid as it is not that needed in adults. The people who need this are infants and those with uremia, an illness related to the kidneys.

This particular amino acid is responsible for the compound histamine, which is used to respond to allergens by stimulating reactions such as itching. Other histidine roles are to develop certain hormones and compounds that assist in different parts of the body, such as the kidney, the liver, and the nerves.

Histidine can be found in several food sources. Examples of these are meat, tuna, milk, and beans.

Isoleucine is another essential amino acid. It is most known as one of the branched-chain amino acids (bcaa for short), a group of amino acids with a distinct chemical structure, along with leucine and valine. It is popular in bcaa related medication and supplements.

A distinct role of isoleucine is to help produce hemoglobin, a type of protein that transports oxygen and carbon dioxide to specific areas in the body. Another is helping with the building of muscles and the healing of wounds.

There are various foods you can get isoleucine from. Examples of these are meat, fish, tofu, and legumes. Additionally, you can get it by taking in bcaa supplements.

Leucine is another amino acid we need in the body. Like isoleucine, it is also one of the branched-chain amino acid groups. It is similar to isoleucine with the number of atoms and the molecular formula but differs in structure and properties.

One of the leucine roles is that it increases insulin levels in the body, which leads to the regulation of blood sugar levels. It also helps regulate protein synthesis and breakdown, lessening muscles’ soreness.

Since leucine is part of the bcaa, it is available in various supplements. You can find leucine in legumes, milk, and soy for food.

Lysine is another one of the essential amino acids. It is a primary and charged type of amino acid. One of its isomers, l-lysine, is an active form of said amino acid and is specifically needed by the human body. Both lysine and l-lysine almost share the same purpose.

One of the critical roles of lysine is to make sure the body keeps calcium, which strengthens bones. It further controls the distribution of calcium throughout the body to prevent buildup, leading to complications. Lysine is also believed to reduce stress receptors, reducing feelings of anxiety.

You can get lysine from meat, eggs, and quinoa.

Methionine is yet another essential amino acid we need in our body. It is a vital amino acid that contains sulfur.

The purpose of methionine is to produce molecules that bear crucial roles to the body, even another amino acid called cysteine, which, in turn, makes other substances like glutathione and taurine. Another one is that methionine can be converted into SAM, a chemical that assists with different chemical reactions, such as proteins and even DNA.

Methionine can be found in food such as eggs, grains, and legumes.

Phenylalanine is also an essential amino acid that plays a critical role in the human body. It has two arrangements, L-phenylalanine and D-phenylalanine, which serve to produce proteins and to be used as medications, respectively.

The function of phenylalanine is to help produce molecules that the body needs. Examples of these are dopamine, a neurotransmitter that controls how we act, plan, and think simultaneously.

Phenylalanine can be found in meats, soy, fish, and legumes.

Threonine is another essential amino acid. It is an uncharged amino acid given its structure and serves as a precursor to two amino acids, glycine, and serine.

Besides the production of the two amino acids as mentioned above -which help produce collagen, muscle tissues, etc.- Threonine also works with the regulation of protein balance and makes sure that the muscles and connective tissues in the body are strong.

You can get reasonable amounts of threonine in cottage cheese and wheat germ.

Tryptophan is an essential amino acid that plays a significant role in our sleep cycle. Like histidine, it is also an amino acid needed by infants.

What makes tryptophan an amino acid needed by infants is that it assists in infant growth, particularly in babies’ brain maturation which entails food intake and their sleep-wake rhythm.  Additionally, it is also known to produce niacin, also known as vitamin B3, which makes serotonin a neurotransmitter that impacts our emotional state for the better.

You can get tryptophan in some poultry, cottage cheese, and wheat germ.

Valine is the essential amino acid and is also one of the three branched-chain amino acids. Like isoleucine and leucine, valine is also in various bcaa supplements.

As a bcaa, valine protects the human muscle by providing it glucose as fuel for physical activities, thus preventing soreness and fatigue. This makes it a good amino acid for people into exercising, sports, or those who regularly do physical activities.

Besides bcaa supplements, you can get valine from eating foods such as soy, cheese, and mushrooms.

Essential amino acids provide many benefits for us, but since our body does not produce them, we have to get them through our diet. To get a better idea of what and how much to consume, it is best to consult a doctor for good results. How to Make Money on Instagram: 5 Easy Ways
The Best Prostate Cancer Treatment