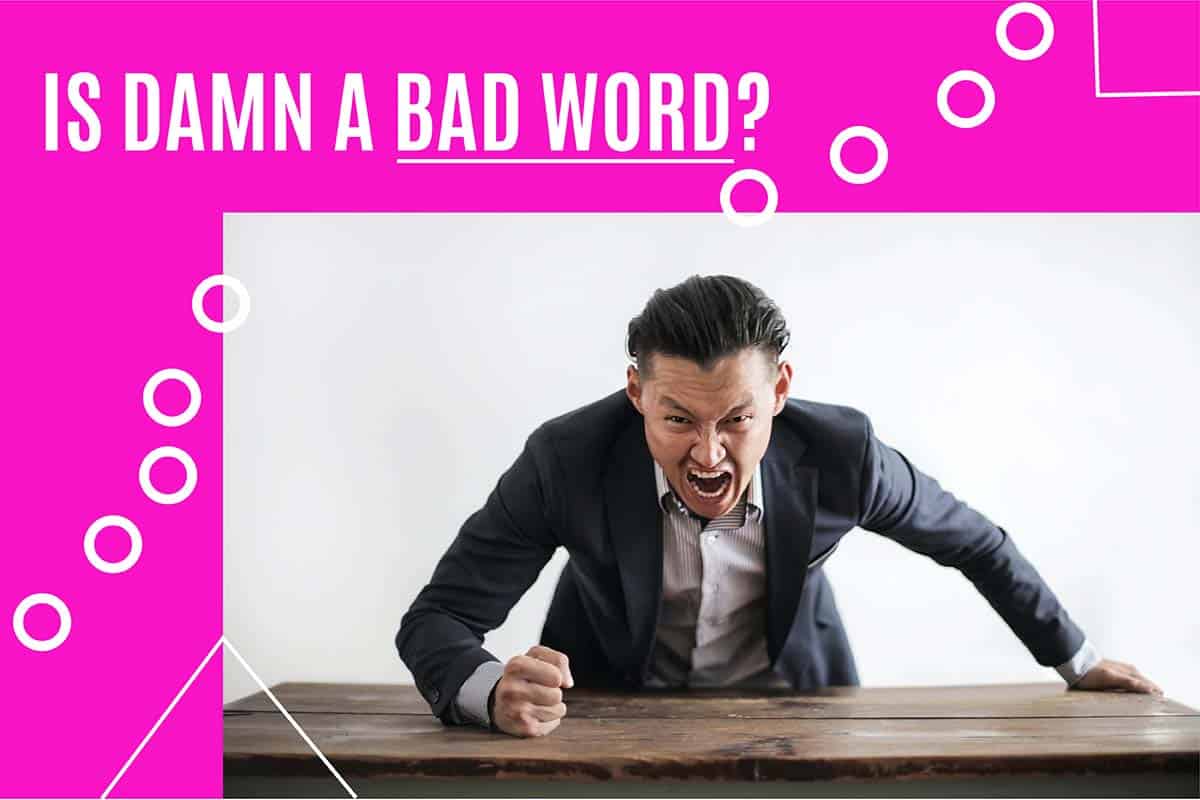 Words are powerful. If they weren’t, authors wouldn’t be spending sleepless nights writing novels or selling millions of copies of their books.

When having a conversation with someone, your choice of words would determine the other person’s response. And you can’t use most words in certain environments or conditions.

One of such words is “damn.” Many have tagged it as bad word. Yet, when one uses a sentence like “the boy is damn good,” it means something positive. Such a statement means the boy in question is very good or superior in whatever he does.

So, this brings us to the question,

Is damn really a bad word?

The answer is yes. When you say words like “damn you,” it means you’re cursing someone. Damn is a curse and bad word.

When you say words like “the girl is damn good,” for example, then damn might seem like a good word. Besides, you’re praising the person in question.

But the truth is damn is a curse word. You also can’t use it in a corporate environment or when having a conversation with a prospective client or a senior colleague at the office.

Just because you say words like “the girl is damn fine” doesn’t make damn the right word here. Most ladies would respond to such a compliment rudely.

In this post, you will know all you need to know about the exclamation, “damn,” to make an informed decision.

Damn is among the most common and naughtiest exclamations as far as the English language is concerned. Many people use it during conversations, without minding the gravity of the hurt it can cause.

Damn means to send someone or condemn someone to hell. It’s impolite and informal. People use damn to express their anger or annoyance.

When someone says, “I don’t give a damn about football,” it means he or she doesn’t care or have an interest in the sport. So damn can mean different bad things. Even when you say words like “the team is damn good in baseball,” you’re praising them and mean well, but rudely. Not everyone would take such a compliment as a friendly gesture.

From 1900 down to the 1950s, damn was an unprintable word. Damn was the most offensive word back then when blasphemy and religion were two powerful things that offset people.

Back then, words like damn were considered taboos, and those who spoke or used such words in their writings were heavily criticized.

A Handy Tip:  Damn and Dam are two different words. They are homophones, meaning they have varied meanings but the same sound.

What Guys Meant Whenever They Say Damn Girl

It’s almost impossible for a gorgeous lady to walk past a group of guys without getting complimented. They could say words like “Dam, girl” in response to her cuteness. Unless you farted or did something awkward, the word “damn” shouldn’t make you feel hurt in any way. It’s a compliment.

Guys would always be guys. They enjoy acknowledging the beauty of the opposite sex at the slightest opportunity.

So, when guys say, “damn, girl,” it means they are awestruck, impressed, blown away and mean to use other powerful complements.

Now, can the phrase “damn, girl” imply something negative? Yes, it can. As earlier mentioned, the context, and individual’s facial expression, tone, or reaction after using such exclamation would determine if the complement is positive or negative.

When a guy says, “dam, girl,” with a look of dissatisfaction or disgust, it means the amazement is negative.

However, people from this part of the world are comfortable using such words. It has become commonplace, and many don’t view it as a bad word.

A guy, who is a stranger, can walk up to a lady and say, “You’re damn cute.” The lady might respond with a smile on her face and a thank you. But in some centuries ago, no one would accept “damn” as a compliment. It was viewed as a bad word and an impolite way of complimenting people, even if you mean no harm.

The word “damn” is a bad word. It doesn’t matter the context or how close you are to the person you’re addressing. Not everyone would accept a compliment in which you used damn, lightly.

So, before using nasty words like “damn” until you get used to it, find ways to put an end to it. Below are simple steps you can take to stop cussing.

A lot of people have gotten too comfortable using cuss words. To them, such words aren’t bad. Unless you take a stand to stop using cuss words, you will never change. And keep in mind that words used regularly become used to you. One day, you might be talking to your boss at the office, and such swear words might slip out of your mouth.

You don’t want to sound informal or impolite when speaking to your boss or someone older than you. Your boss could hand you a sack latter for cussing. So before you let such a tiny mistake that you can fix ruin your life, make a great effort to put a stop to it.

Acknowledge that cuss words are bad. Don’t try to bend them to suit your use. Once you’re able to acknowledge a problem, finding a solution could be a piece of cake.

Don’t join the league of individuals that believe “damn” isn’t a cuss word. It is. If it wasn’t, how come you can’t use such words in a corporate environment? The answer is because it is terrible.

Approach a friend for help:

Breaking a habit like the use of swear words is not the easiest thing to do. Most people need help to overcome such dirty habits. So don’t be afraid to approach your close friends for help. Your relations or spouse may also help you overcome this habit.

You can ask them to make a sound or call your attention whenever you mistakenly use a swear word when having a conversation. With time and persistence on your path, you will put the habit of using swear words behind you.

You can train your brain to start using the right words. It might take a while and a series of corrections to get it right, but it will indeed happen.

Don’t be afraid to make mistakes. Pick yourself up whenever you use a cuss word mistakenly while training your brain. After using the cuss word mistakenly, tell yourself the right word, and repeat it loudly. Keep doing this until you finally put the old habit of using cuss words to rest.

Put your swear jar to use:

Your target could be two weeks or more. Once you achieve it, check how much you have in the jar and use it to get yourself something nice. You can also give the cash to a friend if you think using it for yourself would make you lazier.

Get as many replacement words as you can:

Easy curse words alternatives that you can start using

Damn isn’t a good word. You can’t expect a good response when use you such a cuss word in a conversation. Using such cuss words when interacting with people could land you in trouble. You might mean no harm, but the individual or persons you’re interacting with might take it the wrong way.

So, because people of this present dispensation don’t react angrily to such cuss words often, it doesn’t make it a good word. Besides, there are other words you can use in place of these curse words that won’t cause any harm to people. We hope you picked up a thing or two from this post. Thank you for stopping by.

Why Does My Mother Hate Me? Proper Solution

How Would You Describe Your Sense Of Humor Why Do People Hate Fortnite? An Avid Gamer’s Confession
Injured in a Multi-Vehicle Car Accident? Here’s What to Do