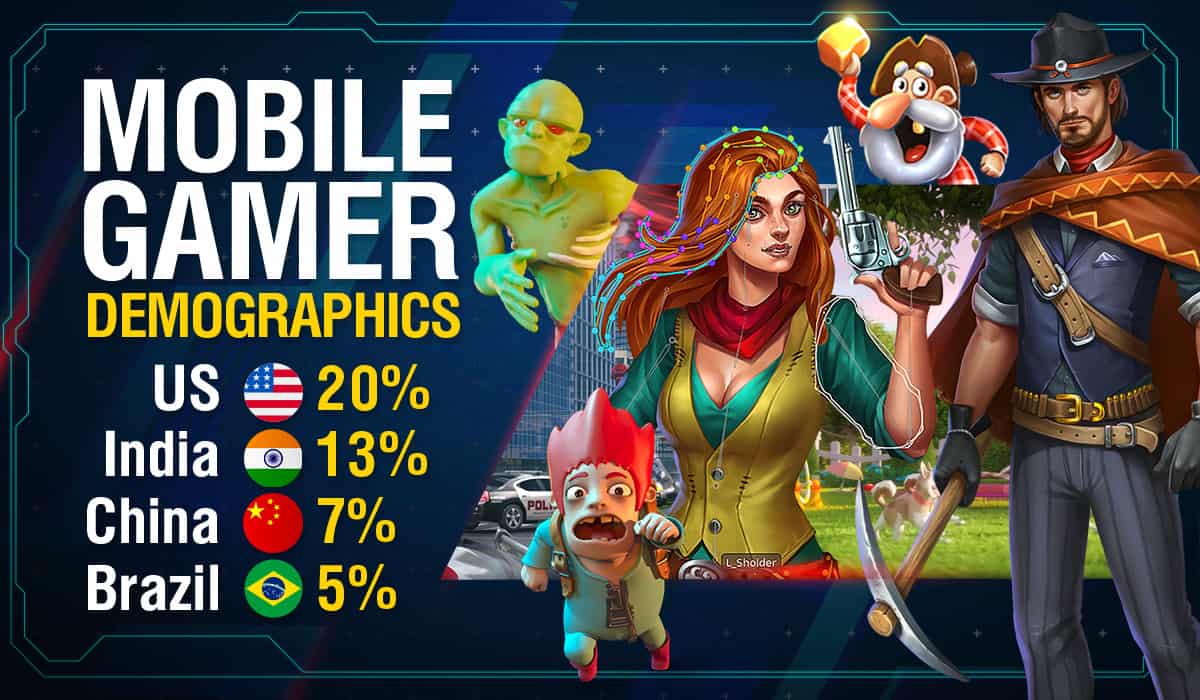 Statistics in games and the gaming segment has always attracted attention. Developers willingly pay attention to in-game indicators and various indicators outside the mobile game statistics to better develop their products.

Tracking trends and knowing the mobile gaming market in depth is the way to make informed decisions. You should know the mobile games industry if you are a game developer or advertiser.

Due to the massive influx of new and existing gamers, we have identified 5 main statistics to understand how modern gaming is developing and what aspects this industry affects.

55% Of Mobile Gamers Are Women

As surprising as it may seem, it is true. The usual image of a gamer is a man (a teenager, a schoolboy, or a bearded hard worker), which has become familiar to us since the beginning of the gaming industry.

But mobile gaming has changed all the adjustments and attracted the attention of players of all ages, genders, and activities. Such a percentage can be explained by the fact that there are a lot of games in the Puzzle genre in the markets, which attract not only with interesting gameplay but also with a pleasant visual component. Also, do not forget about popular games like Genshin Impact, which also attracts fans of anime and fantasy styles.

To back up the statistic, take South Korea as an example: newer mobile gamers are older and prefer more casual games, which is what Puzzle is all about.

Shares of game advertisers by genre in the first half of 2022 can be divided into three genres:

It’s no secret that advertisers are attracted to games in these genres. Only 10-15 seconds of a commercial and in the hands of a gamer, one more life or a nice bonus to the reward – this is only a small part of what you can profit from.

Of course, sometimes ads are too aggressive and intrusive. However, such games do not delay gamers; due to mobile games growth, developers are using softer aspects of the game to interact with ads and advertisers.

It would be a mistake not to include the percentage of mobile gamers by country in this mobile game statistics top—tops the US rankings with 20% of gaming sessions on mobile platforms globally. India is next at 13%, China is at 7%, and Brazil is at 5% for mobile gaming.

Despite the size of the population, it may be strange that China and India fit below the US, but there is a logical explanation for this. The technological support of India is much lower, which reduces the potential audience. In turn, content control in China (as an example of censorship in the World of Warcraft) also makes it difficult to launch mobile projects in this country. But despite the ratio of players, developers like to encourage gamers with various thematic events like Chinese New Year. Sometimes the visual part of games designed for multiculturalism is provided for development by an outsourcing company. Many do not know about art outsource and do not realize the impact of these services on modern games. Maybe now you are completing quests for an event developed by outsourced designers ;).

Earlier, we mentioned advertising in the context of free bonuses. Still, it is important to note that the same bonuses are available for real money gamers are willing to spend.

Mobile games have perfectly adopted the trend of loot boxes in popular games like CS: GO or Dota. Also, players love to spend money on custom skins to stand out from the rest. The most money spent on a mobile game was an Arab player in PUBG Mobile, whose account value by market standards exceeds $1,000,000.

To date, buying “pixels” or additional currency in games for real money does not look like something absurd or new. Instead, this is a standard that gamers have adopted and developed themselves, as demand creates supply. As a result, the number of in-game transactions in mobile games may exceed PC and Console.

Games are one of the users’ most common uses for their mobile devices. According to May 2022, 71.4% of the market is occupied by Android and 27.85% by iOS. And device manufacturers know this, sometimes offering special gaming smartphones, but even the cheapest smartphones allow you to play many casual games. So it is logical to assume that there are more mobile gamers on Android, and Apple is quite far behind in this regard due to brand limitations and exclusivity.

In Google Play, sometimes even those games are free, for which you have to pay in the App Store, albeit relatively little. Several games – Angry Birds, Cut the Rope, and the legendary Pou – are prime examples of this situation. Many games are created for Android but are rarely exclusive to this particular platform. Most often, these games are also in the App Store. But Apple is reaching agreements with many developers to ensure that their most interesting games first come to iOS and then to other mobile platforms..

Both Android and iOS have very wide and varied game catalogs. And their competition with each other encourages developers and mobile gamers to take part in this eternal confrontation.