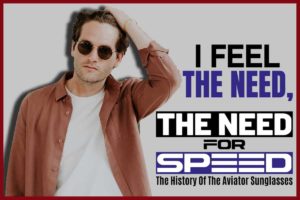 When it comes to iconic accessories you don’t get much more evocative than Aviators, both in terms of the longevity of the style and the popularity of the fashion statement they project.

As a fashion statement aviator sunglasses have gone through highs and lows, sometimes assisted by their place in popular culture, perhaps most famously when adorned by Tom Cruise in his film Top Gun in the late 80s.

The aviator style has a rich history and looks set to continue to be a popular choice when it comes to public consumption and appears to outlive many other trends that have been and gone.

Aviator sunglasses were originally termed ‘pilot’s glasses’ and were made by Baucsh and Lomb in the mid 1930s, unsurprisingly used by pilots in order to protect their eyes from glare while they were flying.

It was hugely popular with servicemen and they replaced outdated flight goggles and were easier and more comfortable for pilots to use. Their elegant design was both practical and decorative and as such encouraged use by pilots both in and out of the cockpit.

Interestingly, post-war, the fact that victorious airmen wore these stylish sunglasses led to them becoming a most-wear item for those who did not take part in the second world war and this saw them move from a necessary object of use, by those in the air force, to a chosen style choice for civilians.

Indeed, even celebrated World War II General Douglas McArthur regularly wore the traditional aviator glasses and they became synonymous with victory. His wearing of them on arrival on a Phillipines beach was perhaps a key defining moment in the history of the sunglasses.

At this point the sunglasses were trademarked a ‘Ray Bans’, a name and brand that lives on to this day.

They were still not commonly named ‘aviators’ and were primarily used by sportsmen and they rose to real prominence in the 1950s, which was ideal timing given that young men in this period had the relevant disposable income to be able to afford a pair.

Marlon Brando made the look cool in the 1950s, the likes of Paul McCartney picked up the baton in the 60s and the turn of that decade, and the subsequent 70s, made good use of psychedelic when it came to tinted lenses.

In the 1970s and 80s they once again began to pierce popular culture and the addition of colored frames made them all the more appealing. The likes of Steve McQueen, Elvis Presley and Michael Jackson have all also played their part in pushing the aviator style.

Indeed the 1980s were a pivotal period for the item and the 1990s saw stars such as Jennifer Aniston and Cher help to push the model with the female market and as such Ray-Ban aviators truly became a behemoth in the fashion industry.

Moves to conquer the younger market are ongoing and when it comes to kids glasses there are aviators to fit pretty much every age group, similarly pushed by celebrities that appeal to the respective age range.

Long before it became the ‘norm’, Ray-Ban were looking to A-listers to hawk their product to the masses. It’s a tried and tested formula that they were one of the first to successfully pioneer.

The Ray-Ban look is very much a success story built on getting ahead of the curve. Whether that’s being one step ahead when it comes to product placement, such as being worn by film stars on screen and not just on the red carpet, or constantly looking for new variations on the theme.

Ray-Ban aviators are one step ahead of the competition.

The Ray-Ban Aviator sunglasses are, by some distance, the best-selling eyewear item of all-time and the appeal continues to this day. The brand is very clever and reinventing itself and does a great job of aligning their products with the stars of the day.

In this way they make their timeless product more and more appealing to every new demographic that comes along. Of course this doesn’t come by accident. Clearly the fashion statement and the stylish look that is embodied in the aviator trademark is strong enough to outlast the competition.

Now as the look enter’s its 85th year it will be interesting to see how it continues to evolve and adapt to the consumer market. We can say with some confidence that the aviator sunglasses will be worn long into the century and beyond, such is the legacy of the iconic look.