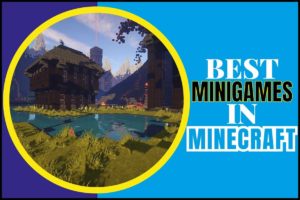 Minecraft has been one of the most popular gaming titles in history, selling millions of copies each year. Back when Minecraft launched as a full release in November 2011, it was simply a sandbox game that consisted of mining for resources and surviving against dangerous mobs at night. As the community grew, Minecraft grew as well, becoming more than just a survival game. People started creating minigames in Minecraft, which were first developed to be played amongst friends but later on these players started hosting them on servers so that other people could also join in on the fun. As Minecraft continued to rise in terms of fame and popularity, the demand for these minigames also went up, resulting in players hosting several servers with different and unique minigames. Competitively more people joined in this race to make their servers stand out, while others used pre-existing minigames from other servers and added a new spin to them to make it a unique game for their server. As of today, Minecraft is packed full of minigames to the point that it is hard to decide what to play.  Fortunately for you, this article is going to be all about that. We’ll cherry-pick for you the best minigames out there.  But before we get to that it is important to note that to play any of the minigames on Minecraft, you need to join a server for which a Minecraft account is necessary. Instead of getting one from Microsoft for a hefty price, we bring to you a better solution. Head to the Eldorado gaming marketplace and see the Minecraft accounts that are for offer for cheap and reasonable prices, compatible with well-known servers such as Hypixel and Mineplex.

Build Battles is a minigame that deploys the creativity of the player. The game consists of players or teams put up against one another in creative mode to build a specific task, which was also chosen by voting from the players themselves. Players need to be well-versed with the use of various blocks and when playing as a team, need coordination to complete the build. The builds need to stick to the topic assigned and be aesthetically pleasing for a team or player to be able to claim victory. The winner is chosen through anonymous voting where all players or teams vote for all the other builds, with the one with the highest amount of votes being the winner. The game can be played on many servers such as Hypixel and Mineplex.

Spleef is a minigame in Minecraft in which several players are pitted against each other. The playfield usually involves easy-to-break blocks, which can sometimes be a few levels, or directly above the void. The objective is to use whatever means to knock other players into the lower platforms till they reach the void, by breaking the current playfield platform using any means. Being one of the simplest and earliest games in Minecraft, it quickly gained several modifications and adaptations from people while sticking to the core idea of the game. Several servers feature Spleef in its classic style or with variations on them.

In sky wars, the players, solo or divided into teams, are each placed on a separate island where they can collect items from chests, then bridge their way and march towards the opposing players. The players have to engage in player-vs-player combat (PVP) to eliminate others by kicking them into the void below or killing them. The game is very popular amongst all Minecraft minigames and has a presence in almost every server out there, either with a bit of variation or in its actual form.

This minigame features a PVP survival area where four players (or teams) spawn at different sides of the map, which is separated by a wall that divides the map into four. The players have to collect resources and survive on their part of the map until the timer hits 00:00. That’s when the walls decimate and the players are pitted against one another. The last man, or team, to survive wins the game. The game is available on many servers such as Hypixel.

This minigame is also referred to as the Hunger Games, as the idea of it is based on the synopsis of the famous movie.  The players spawn on separate elevated platforms placed around a circle in a team or as solos. They cannot move from their spawn point until the countdown ends. When the countdown ends the players are free to move around to gather resources from chests in either the middle of the map or hidden deep in the wilderness. During this period no player can attack another player due to there being a grace period at the start. After the grace period ends the players start to attack each other and the last man standing wins. If after a set amount of time the game has not ended the remaining players will be teleported to a dome where they will fight against each other simultaneously and the last person standing wins. The game can be played on MoxMC, MC-Central, Mineplex, CubeCraft, and several other servers.

Similar to Sky Wars, in this minigame players are spawned on their separate floating islands as solos or divided into teams. In this game mode, the objective is to destroy other teams’ beds and eliminate their players. The bed of each team acts as a re-spawn point for players if they die and without it, they are eliminated from the game when they are killed. Each team has a generator that spawns resources for players to buy better tools, armor for fighting against other players, and blocks to add a protective covering over your bed to make it more difficult to break it and to bridge to other people’s islands to destroy their beds. The mid-island also has more generators for extra resources to help gain an upper hand. The game ends when all other opposing teams’ beds are destroyed and their players get eliminated by falling into the void or getting killed by a player.

Hide n Seek is a very interesting minigame in Minecraft where players have to hide as a block on the map and the seekers have to find them amongst those blocks. The games also allow the hiders to taunt the seekers using various items provided and in return gain points. The hiders also have a wooden sword that they can use to knock back any approaching seekers. The map chosen to play is initially voted by the players from amongst many others, who also vote which side to play for. If all sides vote to be hiders or seekers, the players are randomly distributed into two. The game is available on Hypixel and several other servers.

This list can keep on going endlessly as there are thousands of games to try, but we aimed at bringing to you the finest of minigames so you can dive right in and enjoy them right away. Feel free to explore with your Minecraft account through servers like Hypixel and Mineplex for more incredible minigames – there’s always something new. Have a great time gaming!