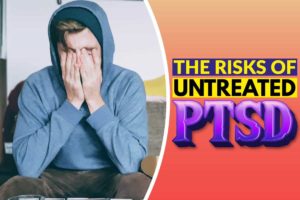 Post-traumatic stress disorder or PTSD is a somewhat common mental health disorder, and it’s also considered very treatable. Unfortunately, many people don’t get treatment for any number of reasons, increasing their risk of serious complications.

Below is more information about PTSD and the risks of leaving it untreated.

An Overview Of PTSD

PTSD is a mental health disorder you can develop after experiencing something traumatic. The traumatic event can include being involved in a severe car accident, a natural disaster, combat, or a sexual assault. Some situations aren’t necessarily dangerous but are sudden and upsetting, which can lead to PTSD. An illness or the death of a loved one are examples.

That’s all normal during a stressful or scary time, but if you develop PTSD, those symptoms don’t necessarily subside when the danger passes. Someone with post-traumatic stress disorder might feel anxiety and fear long after the event.

Not everyone experiencing a traumatic event will develop PTSD. Risk factors, personal and protective factors, your brain, and genetics all play a role.

Risk factors include being a woman, having a history of childhood trauma, and having little or no social support after the event occurs.

The symptoms of PTSD can be grouped into four categories. These are:

As with any other health condition, there are diagnostic criteria that can be used to determine whether you have PTSD.

The Diagnostic and Statistical Manual of Mental Disorders (DSM-5), published by the American Psychiatric Association, has the diagnostic information used by health care professionals.

If you’re diagnosed with PTSD, treatment can help you get a sense of control over your life and your symptoms.

Primarily, the treatment for PTSD is talk therapy, also known as psychotherapy. During psychotherapy for PTSD, you’ll learn skills to manage your symptoms. You can learn how to think differently about yourself, other people, and the world and cope if you experience symptoms or triggers. You can also receive treatment for other problems that relate to the trauma you experienced, such as anxiety or the misuse of alcohol.

The goal of any kind of therapy for PTSD is to help you learn how to handle stress in your life and regain control over your lasting fear.

Antidepressants are among the most frequently relied-on medicines for depression and anxiety. These include selective serotonin reuptake inhibitors (SSRIs).

Lifestyle changes that are helpful for PTSD include staying connecting to people who are caring and supportive, getting plenty of exercise, and eating and sleeping well. Support groups are also a great option.

What Happens If You Don’t Get Treatment?

Unfortunately while there are many fantastic treatment options available for PTSD, a lot of people don’t use them for one reason or another.

The PTSD might be undiagnosed, for example, or maybe you’re nervous about the idea of getting help. You might also think you can get through it on your own.

The reality is, not receiving treatment for PTSD is not only going to diminish your quality of life, but it can lead to complications and serious risks.

PTSD is often a progressive disorder, meaning without treatment it tends to get worse rather than better.

People with untreated post-traumatic stress disorder are likely to find over time, it increasingly affects their daily functionality. It can ultimately be debilitating.

Risks of PTSD that isn’t properly treated and managed, specifically, can include:

The longer you go without treatment for a post-traumatic stress disorder, often the more difficult it is to treat, which is often the case for chronic conditions.

When you’re proactive about getting treatment and you receive the help you need, you can avoid the dangerous psychological and physical side effects that can occur. How Is Telemedicine Changing Prison Health Care?
Has The Opiate Epidemic Been Impacted By The Pandemic?