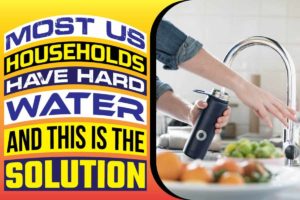 Imagine you wake up one day and couldn’t drink coffee, do your laundry, cook food, or even shower. This could happen because of the unavailability or unsuitability of water. Water is the most essential element for all living matter on the planet.

Did you know that 60% of the human body is water?

If that isn’t enough to convince you of the gigantic role water plays in our lives, then the fact that the planet you live on is 71% water should suffice.

What’s Wrong With Our Water?

Around 85% of the United States doesn’t have access to standard quality water. And no matter how relaxed you are while reading this article, you could be part of this 85%.

Have you ever noticed the limescale buildup on your kitchenware? Or the scaly marks on your favorite china? All of these are clear signs that you aren’t a part of the small lucky percentage of people who have access to naturally occurring soft water.

If that’s you, you need to read on…

What Does Hard Water Mean?

The main characteristic that differentiates hard water from soft water is the presence or absence of minerals.

In most cases, the water that is obtained or sourced from natural bodies like rivers and lakes is soft. Water hardness appears when water that is originally soft comes in contact with subterranean minerals.

A major example of a water-hardening mineral source is limestone, which is mainly composed of calcium and magnesium. Its presence and abundance are acknowledged all over the United States.

As the water comes into contact with limestone, its two minerals (calcium and magnesium) leach off into the water becoming a source of hardness. In most cases, “the more contact time, the harder the water.” This phenomenon explains the different levels of hardness observed in different areas.

As discussed above, hard water levels are different in different areas.

Water passes through many underground routes, which means that it is easier for it to absorb minerals along the way.

Here is a classification of the hardness of water based on the concentration of minerals present in it.

So what is the solution to prevent major property damage and long-term plumbing issues in your building caused by the notorious hardness of water?

Well, a simple and convenient solution is water softening.

Parts Of A Water Softener:

Working Of A Water Softener:

The discharge hose is connected to the softening tank. From this tank, it provides the fluid with a direction to either a dry well or a drainpipe. The softener tank contains resin masses. These are tightly packed and sealed inside the softener tank.

The brine tank has a covering that is removable. The tank can be filled with salt pellets, or another option is potassium chloride pallets.

Salt-based softeners: These machines remove calcium and magnesium from the water supply with the help of a negatively charged resin bed.

Hard water is a harmful entity that causes irritation to the skin, damages household items, and causes plumbing as well as pipeline issues. Hence make the wise decision of investing in a water softener for long-term safety.